The Manchester St. Petersburg Friendship Society unreservedly condemns the invasion of the sovereign state of Ukraine by Russian forces. We wish to express our solidarity with the Ukrainian people and our support for those in Russia, including in Manchester’s partner city of St. Petersburg, who are advocating and working for peace.
The Manchester St. Petersburg Friendship Society aims to develop friendship and understanding. In the current circumstance we are reviewing our activities and will update our members in due course.

Romanticising the New Silk Road: The Visuals of Chinese-Russian Media

The Belt and Road Initiative (BRI) is arguably the key to China’s contemporary economic strategy. However, there is low understanding and trust towards the project in many of the states in which concrete collaborations are planned or underway. This talk interrogates how the Chinese state has responded to
such skepticism, focusing on media collaboration between China’s and Russia’s state-owned international broadcasters, CGTN, and RT. The particular focus is a 5-part co-produced documentary series aimed at introducing international English-speaking audiences to the metaphorical new ‘Silk Road’.

This series reimagines the economic and infrastructural project in both historically-romantic and futuristic ways, with human stories central to both. But how strategic is this Chinese-Russian media partnership? Situating the series within the broader context of Russian and Chinese political, economic and media strategy reveals certain tensions underlying this collaboration, as well as broader limitations that apply when state actors attempt to reimagine their policy activities via global media.

Precious Chatterje-Doody is a Lecturer in Politics and International Studies at Open University. Her research is focused on communication, perception and foreign policy, with a particular focus on Russia, as well as its international broadcaster, RT.

Welfare Reform and the Third Sector in Russia and Belarus

Since the collapse of the USSR, post-Soviet countries have been following different paths of development. While some conducted radical political and economic reforms, others made only partial changes to their political and economic structures. However, in both cases there were significant changes in national welfare systems. In Russia since 2000 the welfare system has moved away from the Soviet model of heavy subsidies and broad state social provision to a more mixed model based on means-testing, privatisation and the increasing involvement of non-state actors such as NGOs and commercial enterprises in the provision of social services to different vulnerable groups. In Belarus the state has remained largely responsible for the delivery of social services as it was during the Soviet period, but quality is often poor, eligibility has been tightened since 2007 and there have been nascent attempts recently to involve NGOs in the delivery of social services. At the same time, provision of public welfare continues to be of vital importance in maintaining the legitimacy of the electoral authoritarian regimes in both countries and non-state actors working in this area may have some capacity to have input into the development of welfare policy.

I use data gathered during extensive interviews in both countries in 2015-2018 to answer the following questions: What are the recent developments (and their causes) in welfare policies in Russia and Belarus? How does the political regime in these two post-Soviet states influence opportunities for non-state actors to participate in welfare policy? What role do they play in the national policy process? Are there any windows of opportunities for the non-state actors to increase their influence on welfare policies? And, if so, what are the potential outcomes of such participation?

Eleanor joined MMU in January 2019. Prior to her current appointment she was Lecturer in Politics at the University of Liverpool and Leverhulme Early Career Fellow at Queen Mary, University of London. She completed her PhD in Russian and EU Politics at the University of Glasgow in 2013 and has held visiting fellowships at the University of Helsinki and New York University. Her research interests include policymaking processes in electoral authoritarian regimes, welfare reform, social policy and social rights in Russia and other post-Soviet states. She is currently working on two research projects: 1) a comparative project on social security and social service delivery in Russia and Belarus and 2) a project in collaboration with Dr Claire Pierson (University of Liverpool) exploring how authoritarian regimes use conservative family policy to achieve political outcomes.

This will not be held at the Cenotaph in St Peter’s Square this year.  The Russian community in Manchester are instead organising a meeting with a slide show on Sunday January 26th at 5pm.  This will be held in the Boardroom (3rd floor) of the Rain Bar on Great Bridgewater St, Manchester.
There will be a charge of £5 per person to contribute to the hire of the room. 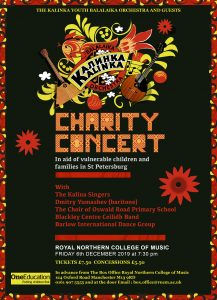 Manchester’s own Kalinka Balalaika Orchestra and friends present a Charity Concert in aid of St Gregory Foundation’s Sunflower Centre in St Petersburg which supports orphanage-leavers and their families. 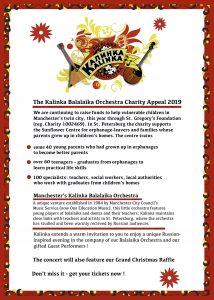 This commemoration is organised by representatives of the Russian community in Manchester – the Anglo Russian and Eastern European Society.

The programme for the day is as follows: