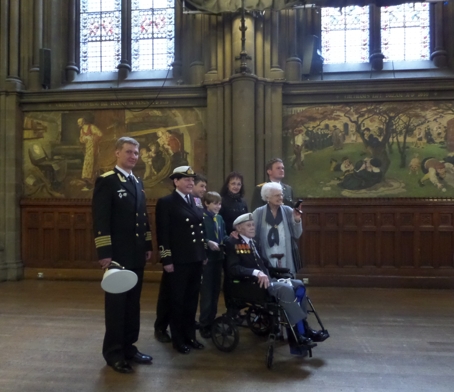 Mr Mc Neill and Mrs Mc Neill holding aloft the Arctic Star award Medal presented to the veterans of The Arctic Convoys 70 years ago. Mr Mc Neill is accompanied by his two grandsons,military members of the Russian Federation and Commander Janet Evans Deputy Lieutenant of Greater Manchester who presented The Artic Star Medal. 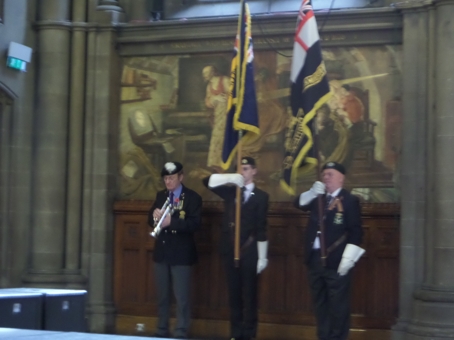 They shall grow not old, as we that are left grow old
Age shall not weary them, nor the years condem
At the going down of the sun and in the morning

We will remember them.

Mr Mc Neill saw active service with The Royal Navy throughout The Second World war.He braved the perils and dangers of convoy escort first in The Medditerranean to Malta,then to Arctic Russia and finally as protective cover during The Normandy Landings.

Through arctic seas seventy eight convoys from britain to Northern Russia brought The Soviet Union the lifeline it needed to fight off The Nazis.
Some of the ships that left Britain never came back.The British faced continued German attacks from the air and the sea and 3000 men died as a result.The supplies that arrived kept millions of Russian people alive.British planes flown by Russians repelled the approaching German Army.Many people who grew up in The soviet Union during the war still remember eating British food – handed out in rations without which many would have perished.

In Russia the importance of The Arctic Convoys have never been forgotton, Britain the only ally to provide desperate assistance, which swung the balance on The Eastern Front.